Book: The New Ministry of Truth

The catharsis writing The New Ministry of Truth provided to the author was the driving force behind launching this website. And, he makes no claims about being a smart man, so hopefully the fact that he wrote a book serves as inspiration to all veterans to begin writing. 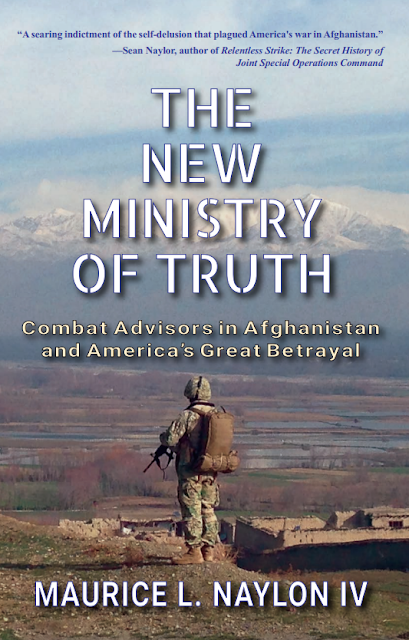 This is not a book about epic firefights. It’s not about battlefield heroics. No one will extract a blockbuster movie from these words. Rather, the purpose of this book is to use the story of a combat advisor’s deployment to Afghanistan to illustrate one of America’s gravest betrayals.

For nearly two decades, the United States has sent its youth to fight and die in Afghanistan, all the while failing to define a clear political objective to be achieved by these military means. This failure came to a head as 2014 rolled into 2015, and the US government declared an “end to combat operations.” These empty words failed to align with the reality on the ground, they simply forced our nation’s warfighters to shoulder the risk of combat without the ability to defend themselves.

This is the story of that time, about America’s new Ministry of Truth and the servicemembers sent to carry out its whims.

Praise for The New Ministry of Truth

"A searing indictment of the self-delusion that plagued America's war in Afghanistan."

"Naylon grinds down to the grain describing the turbulence of being a military advisor during The Long War - written in plain speak with no punches pulled.  If there was a military decoration for, "telling it like it is," Naylon's award citation is already written."

“The New Ministry of Truth is an honest, gut-wrenching account of Chipp Naylon’s service in Afghanistan as a military adviser. Written clearly, cogently and bluntly, it is the kind of no b.s. memoir one expects from a United States Marine. But it is also a thoughtful, analytical and intimate account of America’s longest war—and the challenges and frustrations endemic to it.”

-Professor Bruce Hoffman, Georgetown University and author of Inside Terrorism

"A solid, down-to-earth, honest narrative that shows the skills an adviser must learn. On top of that, Chipp has the insight and sense of humor to describe the whackiness of our endless mission in faraway and fractured Afghanistan."

- Bing West, author of The Wrong War and One Million Steps: A Marine Platoon at War