A Meltdown in the Deli Section: Daily Life after Combat and the Catharsis of Writing

Maurice “Chipp” Naylon served nine years in the Marine Corps as an infantry officer. He discusses both the challenges inherent to reacclimating to daily life at home upon returning from a combat deployment and how writing can help address those challenges. He is the author of The New Ministry of Truth: Combat Advisors in Afghanistan and America’s Great Betrayal. 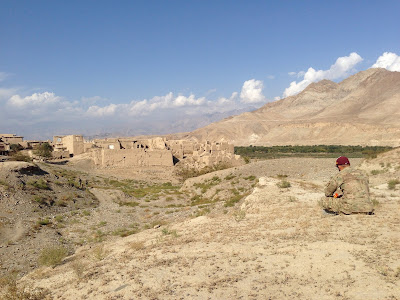 Following a 2014-15 deployment as a combat advisor, I returned from Afghanistan feeling pretty normal. Besides the to-be-expected brief panics when I reached for my pistol and realized it wasn’t on my hip, life was great. I was thrilled to be home with my fiancée, Jenna, and days in sunny southern California are, all-in-all, a bit better than combat patrols (yes, mild understatement).

As this had been my first combat deployment, I didn’t quite know what to expect upon returning home. That first week back, I was pleasantly surprised to see that my day-to-day life appeared to be “business as usual.” However, I realized how wrong this initial assessment was when things came off the rails in, of all places, the supermarket deli section.

As we sought to rebuild our weekly routine, Jenna and I headed to the grocery store one Sunday shortly after I returned home - typically a fairly uneventful trip. Looking at the list, I said I’d take a number and wait to order everything we needed at the deli counter. With “orders issued,” I turned to the task at hand. So, I was surprised when a few seconds later, Jenna was still there, clearly with something on her mind.

Me: “What’s up?”
Jenna: “You sure you know which turkey to get?”
Me: “I JUST SPENT SEVEN MONTHS LEADING TROOPS IN COMBAT - I DON’T NEED TO BE F***ING SUPERVISED IN THE DELI SECTION!!!”

Wow - coming off the top ropes out of nowhere. I had no idea where this explosion came from, but it was raw anger. After profusely apologizing for my outburst - and feeling absolutely horrible - it became quite clear that things were not, as I initially believed, completely okay.

During our time in Afghanistan, I had become progressively more and more frustrated and upset with the situation every day. While the details of my anger are beyond the scope of this article, it boiled down to this question: how could our country continue to send its youth to fight and die in an unwinnable situation, failing to define realistic means by which military force could accomplish vague political objectives?

To cope with this growing anger, I fell back on an old habit from my pre-Marine days backpacking around on my own: journaling. I knew that I needed to focus on bringing our guys home alive - not this inner rage. By dumping my emotions into a journal, I figured I could compartmentalize - literally and figuratively - my emotions into a small notebook.

Returning from deployment, I initially assumed this compartmentalization remained intact. Like I said, I experienced those first few days Stateside with rose-colored glasses. My deli meltdown forced me to acknowledge what I probably knew deep down: coping with my anger was not as black and white as simply throwing my deployment journal into a drawer.

That next week, I did some serious soul searching. Broadly speaking, I saw two possible ways to cope with my anger. On one side of the spectrum, I could bury it down deeply, not addressing it but otherwise living life, acknowledging that these “deli outbursts” would be an inevitable - though ideally rare - byproduct of this suppression. On the other side of the spectrum, I could address my rage and seek a means to come to terms with it in my own way.

I chose the latter option, pulling my journal out of the drawer. I knew that I needed to tell my story, both for selfish reasons of healing and for what I believe to be the importance of its message. For the next four years, I wrote a little bit every morning before work, gradually turning the raw emotion of my journal into a coherent narrative. This book was the end result:

The New Ministry of Truth: Combat Advisors in Afghanistan and America’s Great Betrayal

Having completed this process, I hope that, in some small way, my words help speak to the anger I know many veterans share. We all cope with our experiences and emotions differently. For me, the catharsis of writing helped immensely. Will I ever completely shake the anger and frustration this deployment caused? Absolutely not. But, writing - and sharing - this story has provided me a much-needed measure of solace.